“Music gives a soul to the universe,
wings to the mind, flight to the imagination,
and life to everything.”

A charming and talented wonam with a smile on her face, a royal instrument and 47 angelic resounded strings.

This is only one part of this lady. Her gentle face, her shell hides an enourmous inner power, sedulity, diligence and determination.
This royal instrument has become her destiny several years ago.Harp tones alleviate fear and stimulate ontogenetically and
phylogenetically the oldest brain structures, so they can awaken and release primordial impulses and creative instincts that lead to new
and more optimal way of behavior. The harpist Katarína Ševčíková places great emphasis in her play on evoking a feeling
of magic, fairy tale, well-being, relaxation and harmony. That’s why in her repertoire you can find works from classical music
of different periods, but also music of other genres (pop, folk, jazz) through oriental Irish or Scotish music.

Katarína Ševčíková is one of the most sought-after harpist not only in the
Czech Republic and Slovakia, but with her brilliant play, technical
knowledge and charm she enchanted enthusiastic listeners of the royal
instrument in other countries such as Switzerland, Germany, Austria
and Scandinavia, where she regularly gives concerts. She focuses mainly on solo
playand annually for several years, tons of harp regularly accompany more
than 400 events, concert, gala evening, private events, as well as the
events of relaxing character and music therapy in spa towns to caress
the body and soul with music.
In addition to solo concerts, she also performs in chamber compositions
and collaborates with a number of musicians …
She has become one of the most sought after harpists in all music genres and
the world of showbusiness in the last decade. Tone and concert of her
royal harp annually very elegantly and dignifiedly open various prestigious
events and festive occasions not only in our country but also abroad.

Since 2020, has Katarína started teaching, selling her knowledge and
experience to future generations in harp lessons in Bavaria, Germany.

She was born in Slovakia to a family that had a deep music tradition.
Her devotion to music was inherited from her father, just as her brother
Martin Sevcik, one of Europe’s most important and talented jazz
musician. She began playing piano at the age of five and a few years
later also began taking lessons on the harp. After completing primary
school, she was accepted by the Conservatory in Žilina where she studied
the harp under the guidance of a professor Professor T. Kováč.
She successfully completed this study in 1998 with a graduation concert
playing G. F. Handel’s ‘Concert for harp and orchestra in B Maj’
accompanied by the State Chamber Orchestra in Žilina.
Since 1999 she has lived in the Czech Republic in the beautiful spa town
of Mariánské Lázně. She plays a renowned Italian Salvi harp. 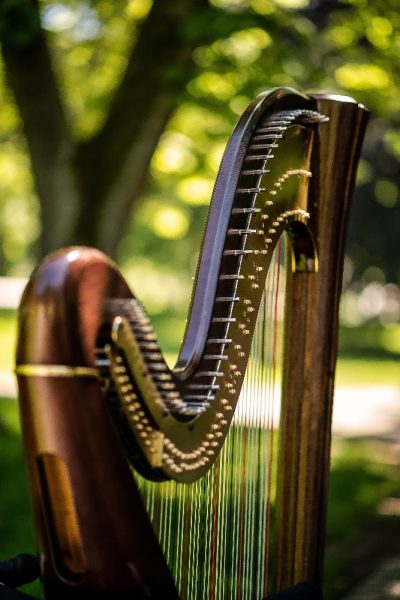 The harp is a stringed musical instrument that has a number of individual
strings running at an angle to its soundboard; the strings are plucked
with the fingers.Harps have been known since antiquity in Asia, Africa
and Europe, dating back at least as early as 3000 BCE.
The instrument had great popularity in Europe during the Middle Ages
and Renaissance, where it evolved into a wide range of variants with new
technologies, and was disseminated to Europe’s colonies, finding particular
popularity in Latin America.Although some ancient members of the harp
family died out in the Near East and South Asia, descendants of early harps
are still played in Myanmar and parts of Africa, and other defunct
variants in Europe and Asia have been utilized by musicians in the modern era.
Harps vary globally in many ways. In terms of size, many smaller harps
can be played on the lap, whereas larger harps are quite heavy and rest
on the floor. Different harps may use strings of catgut, nylon, metal,
or some combination. All harps have a neck, resonator, and strings.
Frame harps or triangular harps have a pillar at their long end
to support the strings, while open harps, such as arch harps and bow
harps, do not. Modern harps also vary in techniques used to extend
the range and chromaticism of the strings.

On lever harps one adjusts a string’s note mid-performance by flipping a lever, which shortens the string enough to raise the pitch by a
chromatic sharp. On pedal harps depressing the pedal one step turns geared levers on the strings for all octaves of a single pitch;
most allow a second step that turns a second set of levers. The pedal harp is a standard instrument in the orchestra of the Romantic music
era (ca. 1800–1910 CE) and the 20th and 21st century music era.

Harps are essentially triangular and made primarily of wood. Strings are made of gut or wire, often replaced in the modern day by nylon
or metal. The top end of each string is secured on the crossbar or neck, where each will have a tuning peg or similar device
to adjust the pitch. From the crossbar, the string runs down to the sounding board on the resonating body, where it is secured with a knot; on modern harps the string’s hole is protected with an eyelet to limit wear on the wood. It is the distance between the tuning peg and
the soundboard, as well as tension and weight of the string, which decide the pitch of the string. The body is hollow, and when
a taut string is plucked, the body resonates, projecting sound.

“Music comes to me more
readily than words.”

The longest side of the harp is called the column or pillar, though some earlier harps, such as a “bow harp”, lack a pillar.
On most harps the sole purpose of the pillar is to hold up the neck against the great strain of the strings. On harps
which have pedals (largely the modern concert harp), the pillar is a hollow column and encloses the rods which adjust
the pitches, which are levered by pressing pedals at the base of the instrument.

On harps of earlier design, a given string can play only a single note without retuning. In many cases this means such a harp
can only play in one key at a time and must be manually retuned to play in another key. Various remedies to this limitation
evolved: the addition of extra strings to cover chromatic notes (sometimes in separate or angled rows distinct from the main row
of strings), addition of small levers on the crossbar which when actuated raise the pitch of a string by a set interval
(usually a semitone), or use of pedals at the base of the instrument which change the pitch of a string when pressed with the foot.
These solutions increase the versatility of a harp at the cost of adding complexity, weight, and expense.

The real and strong love to music is something that cannot be learnt or bought. It´s a gift which even if it´s endowed,
it has to be worked out to reach the target. A person has to go through the years of diligent work, which hide long hours
of rehearsing and a big stamina. Without these personality traits it would be impossible.

It is said that a mirror helps us to see our face, but thanks to art we can see our soul. I´m very pleased to be so lucky
that I soon found myself in my profession. I can´t imagine my life without it. The things are sometimes not easy
in our lifes and my primary aim is to spread joy, happiness and caress the souls even in the days of sadness.